With DICTEE it is possible to model specifications and generate code from these for all possible PLC platforms. DICTEE was developed by Strypes to develop software based on the National Tunnel Standard. From the specifications, software can be generated for any platform with minimal effort.

Challenges in the world of infrastructure

In recent years, models have become indispensable in the world of infrastructure. For example, it is nowadays customary to model complete structures in BIM (building information models) long before their realisation, requirements are recorded in tree structures using software such as Relatics and for technical installations Computational Fluid Dynamics (CFDs) are used to design systems such as ventilation and overpressure. 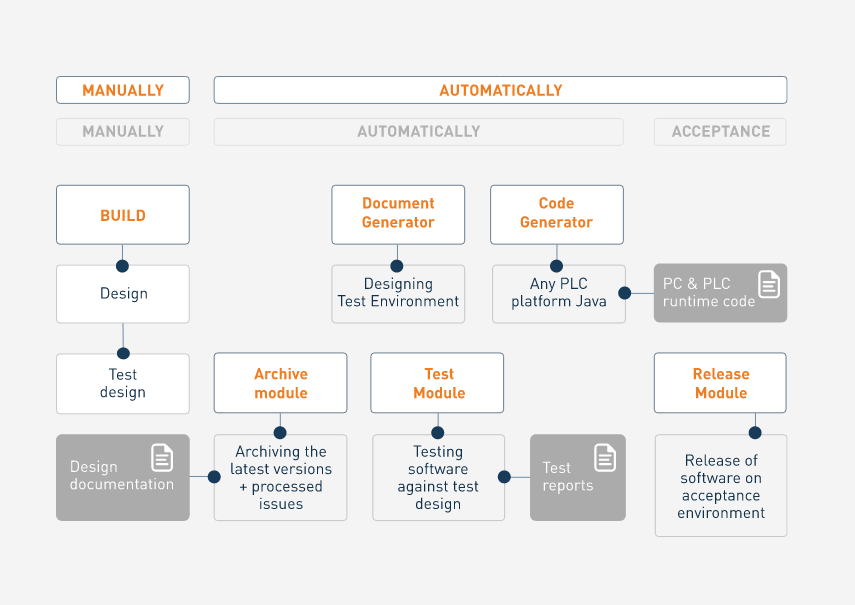 In the field of dynamic behaviour, modelling techniques such as SysML and tools such as Enterprise Architect are used to capture designs. Although the level of knowledge of both client and contractor is steadily increasing, there are still a number of challenges within the domain:

These challenges have a number of causes:

The idea behind SysML is precisely to make it easier to discuss the design, determine the impact of changes and then implement them consistently. In this respect, there are still sufficient opportunities to derive added value from models.

Model Driven Engineering (MDE) dates back to the 1980s, as did the first CASE (Computer Aided Software Engineering) tools. This form of engineering sees the model as the source of all the information needed to realise a solution and always aims to improve productivity through re-use (of standardised models), simplify the design process and improve communication between individuals and teams. The chosen MDE approach is considered successful if the model is logical for people within the domain and if it is usable for further realisation.

For several years now, Rijkswaterstaat has been using the Dutch Tunnel Standard (Landelijke Standaard Tunnels, LTS), which applies to all new and renovated tunnels that meet the criteria of the standard. The aim of the standard is to provide a uniform and reusable set of specifications that can be applied to all tunnels, a concept that is certainly interesting from an MDE point of view.

Strypes took the initiative to investigate the feasibility of an MDE environment for the LTS and as a result realised the tool DICTEE.

The concept behind DICTEE DICTEE is an application developed entirely within Strypes in order to quickly and easily realise platform-independent tunnel control based on the LTS concept. The development is based on two simple objectives:

The name “DICTEE” can be interpreted in two ways. First of all, the abbreviation stands for “Device Independent Code for Tunnels based on the Eclipse Ecosystem”, and it is also a metaphor for the traditional primary school dictation: the teacher dictates and the pupils take over, just as the LTS is literally dictated and adopted.

DICTEE’s design consists of a number of pillars:

The way of defining behaviour has been adopted in the tool.