The methodologies of Agile are now commonplace within a large part of the IT world. In the infrastructure market and industrial automation, too, it is becoming increasingly common for traditional waterfall projects to be replaced by flexible sprints in scrum teams. Reason enough for a dozen enthusiastic colleagues to get their heads together and exchange their experiences and ideas during the first edition of the Strypes Agile Coffee!

After a tasty buffet, Scrum Master Ronald van den Heiligenberg kicked off the meeting at the head office in Leersum. The programme started with a House of Commons discussion in which the Stryperts divided themselves into two teams (“for” and “against”) and on the basis of Dot-voting selected two positions that either had to be defended or attacked. 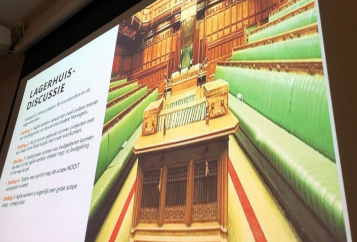 It soon became clear that there was absolutely no after-dinner-dip, because during the first proposition (“During a sprint the scope may never change”) the arguments of the two camps soon flew back and forth. Opponents pointed to the flexibility of Agile and the fact that there can always be unexpected work lurking around, but in the end, the discussion was decided in favour of the proponents who came up with the argument that it is a better choice to abort a sprint and start planning again. In this way, the adaptation remains controlled according to plan. The second proposition (“If you use scrum, fixed price, fixed scope projects can no longer occur”) went somewhat less smoothly. The Agile purists are generally in favour of this proposition, but within the infrastructure market this type of project is still the order of the day, which is why most participants quickly agreed that they can still prevent it.

After concluding the discussions, there was a short intermezzo in the form of a video (see below) showing how practice and teamwork can ensure a very efficient and fast process, with a Formula 1 team pit stop as an example. One of the participants (who happens to be an inveterate F1 fan) even reported that an English hospital used the techniques of the same team to improve processes during critical operations. A nice addition that could count on a lot of positive reactions!

The programme then continued with an exercise in Liberating Structures to see if it would be possible to apply the principle of the House of Commons discussion in your daily work. The 1-2-4-all technique was used to do this: first, one minute of self-reflection, then two minutes in a group of two, then four minutes in a group of four, and finally with the whole group. This fast and very effective method yielded two concrete ideas for applying the House of Commons discussion in practice, namely when reviewing documents and defending draft decisions. The form of discussion in fact forces the designer to defend his or her choices in front of a group, which automatically forces you to make well-considered decisions.

After a closing by Scrum Master Ronald, all participants agreed: we want more! Several attendees indicated that the expectations may not have been entirely clear beforehand, but that this was quickly made up for by the relaxed, positive atmosphere and the good substantive discussions. The exchange of ideas and mutual interaction were particularly positive. The organisation was also very enthusiastic and is already busy making plans for a second edition. More about that later!